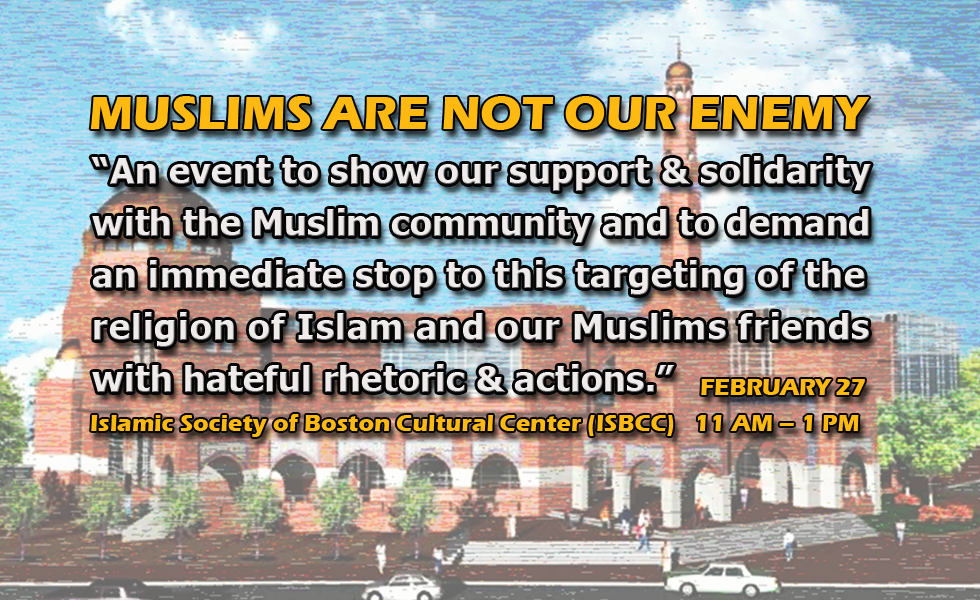 CALLING ALL VETERANS  | STAND WITH OUR MUSLIM FRIENDS

SAVE THE DATE: SATURDAY, FEBRUARY 27

We are planning a gathering / program / rally at the Islamic Society of Boston on Saturday, February 27. This is the largest Mosque in New England, located in Roxbury, MA. We have been working with members of the Mosque to put together a program showing our support, as veterans, for our Muslim friends, neighbors and co-workers.

PLEASE REACH OUT TO FELLOW VETERANS AND ASK THEM TO JOIN US. WE ARE INVITING OTHER VETERANS TO JOIN US FOR THIS VERY IMPORTANT GATHERING TO MAKE IT CLEAR VETERANS STAND AGAINST THIS HATRED, BIGOTRY AND ISLAMOPHOBIA DIRECTED TOWARDS MUSLIMS EVERYWHERE.
We anticipate the speaking part of the program to last about an hour then we will move inside to share conversation and snacks. The speakers will consist of veterans, Muslim members of the Mosque and invited guests.
We have all seen and heard the hateful xenophobia / Islamophobia language directed towards Muslims. These hateful attacks towards American Muslims continue to fester and in some cases have resulted in violence towards innocent Muslims here in the U.S. Local Muslims have told us of them being harassed on the street. If a Muslim woman is wearing a head scarf it makes her an easy target. Pat Scanlon, chair of our committee, says “I am friends with a Muslim family whose twelve-year-old daughter told me that she was harassed in the schoolyard by a boy in her class who was calling her a terrorist. This young girl is an Iraqi refugee, straight A student, popular and is the ultimate young American girl and proudly just became an American citizen. She does not wear a head scarf yet was targeted in the schoolyard by another student.”
We as veterans intend to gather at the Mosque to show our support and solidarity with the Muslim community and to demand an immediate stop to this targeting of the religion of Islam and Muslims. This bigotry and religious intolerance must be challenged. We want to make it clear that “Muslims are Not Our Enemy”.
Muslims are:Friends, Neighbors,Co-workers, Business OwnersEducators, Doctors, Nurses, Athletes, Police, Firefighters, Scientists, Mail Carriers, Engineers, Politicians, Carpenters, Bakers and Caregivers, etc.Muslims serve in the:Army, Navy, Air Force, Marines, Coast Guard, National Guard
STOP THE BIGOTRY!

Please see our message below and please ask fellow veterans to join us to stand against this hatred, bigotry and Islamophobia.

Veterans For Peace (VFP) is developing a campaign to defend the values of religious freedom, equality and individual rights in the U.S. These are the very same values embedded in our Constitution that many of us believed we were defending when serving in the military. And time is urgent.
The campaign will be initiated and coordinated by Veterans For Peace, however it is a broad-based effort. All veterans who agree that bigotry and religious intolerance must be challenged are welcome. Veterans do not have to join VFP or agree with VFP on other issues to participate.
Veterans For Peace is organizing this campaign because Islamophobia here in the U.S. is a path for further demonization of Muslims in foreign lands as a prelude to call for U.S. troops to be sent to Iraq and Syria. This is a proactive effort to blunt the rise of hate and calls for more war.

A Call to All Veterans:

We are U.S. military veterans, many of whom saw combat in Afghanistan, Iraq and Vietnam, who are appalled by the current spate of bigotry, racism and hatred expressed toward Muslims, the huge majority of whom are law-abiding and productive citizens.

Bigotry and racism violate all of the values we believed we were defending during our military service. The ideals contained in the Constitution, to the degree they have been manifested in America, have been a beacon to much of the world because of the diversity, openness, and respect for people of all faiths that most Americans live by. It will be a great calamity if we let fear give rise to hatred.

Fear-mongering endangers our national security and gives rise to hatred and racism that play into the hands of an enemy that wants to convince Muslims around the world that the West, led by the U.S., hates them, and that joining ISIL or similar organizations is the only way to truly observe and defend their religion. We can never defend ourselves effectively by playing into our adversary’s strategy, giving credibility to their recruitment propaganda. We endanger ourselves whenever we make that mistake.

We call on all Americans to let their voices be heard and to stand up for the values of tolerance, respect and love. As Pope Francis told Congress, “to imitate the hatred and violence of tyrants and murderers is the best way to take their place.”

_____________________________________________________________________
Since the September 11, 2001 tragedy, suspicion of Muslims and bigotry against them has been a persistent concern in this country. So much so that a term was popularized to describe it, Islamophobia. But the November 13th terrorist attacks in Paris caused a spike in Islamophobic rhetoric and behavior here at home — 4,760 miles away from the site of the assaults. The San Bernardino December 2nd shootings added fuel to a fire of hate that was already blazing. Fortunately, today the hate is a kind of controlled burn; held back because fear has not overcome the majority of people. However, one or two more attacks in the U.S. by people sympathetic to ISIL may tip this tenuous balance, possibly sending a new uncontrolled wave of fear across the country.
The purpose of terrorism is to create fear. A large, successful attack would strain our nation’s social tapestry, tearing at threads of tolerance and security that hold it together. Racism, religious intolerance and general bigotry are historical corruptions in the American story. They raise their monstrous heads during times of fear for economic and physical security. Bigotry gains traction when people are afraid. When people are afraid, they will follow the awful leadership of the worst politicians and mass media outlets. They will attack Muslims here and call for more war and “boots on the ground” abroad. They will sacrifice our freedoms and cast a substantial vote for the ugliest rhetoric targeting Muslims. Military veterans, especially combat veterans, have near unassailable credibility to stand up to this tide.
We believe the Islamophobia personified by recent political rhetoric repulses much of the nation. We want to shore up those who agree with us but may be wavering, and appeal to those who can be moved off of initial receptiveness to these attacks. Other than the obvious interests in justice and human rights, Veterans For Peace is organizing this effort to mobilize all veterans because when racism and bigotry go unchallenged, the foreign and military policy consequences can be disastrous:
·         First, the current outbreak of Islamophobia puts at risk the lives of Muslim citizens of the U.S. and asylum-seekers.
·         Second, the bigotry expressed by some political leaders motivate hateful actions towards Muslims and provides a sense that anti-Muslim behavior is acceptable.
·         Third, targeting Muslims confirms ISIL’s claim that the U.S. is anti-Muslim.
·         Fourth, hate directed at Muslims here in the U.S. also reflects hateful feelings towards Muslims abroad and provides an easier path to wage wars and send troops into harm’s way.
It is morally unacceptable to call for the carpet-bombing of countries and guarantees — as we who have fought and trained to fight know – the deaths of countless civilians, women and children. There has been enough hate and death. Let us work to bring peace at home and abroad.
Michael T. McPhearson
Veterans For Peace
Executive Director

← About Smedley VFP
Globe Article: Warriors Celebrating Peace, Not Themselves →