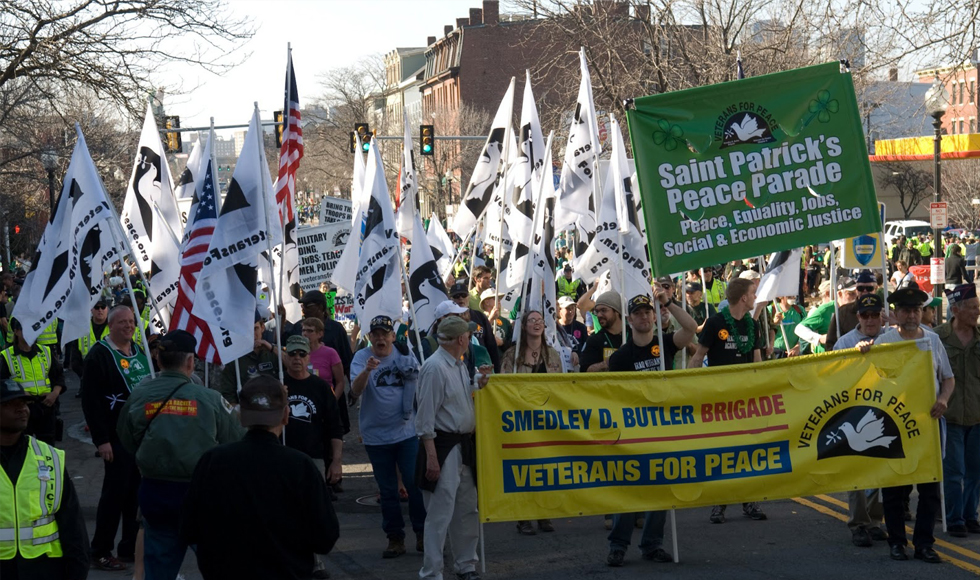 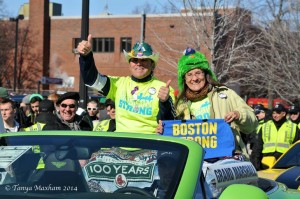 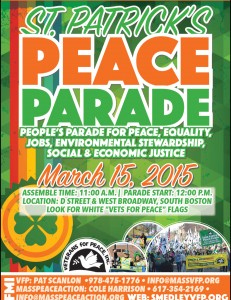 Why are there two parades in South Boston on Saint Patrick’s Day? 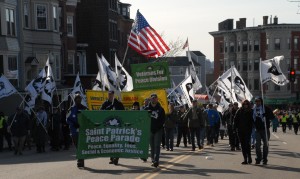 Since 2011 Veterans For Peace have been denied to walk in the historic
Saint Patrick’s Parade in South Boston. This is the largest parade of its kind
in the country with over 700,000 people viewing the parade. The parade has
a dual purpose; the celebration of Saint Patrick and the Irish traditions and
heritage and a celebration of Evacuation Day, the day the British were run
out of Boston. Both days fall on March 17th, so the City of Boston thought it
a good idea to have the Allied War Veterans Council (AWVC) organize the
parade. The problem is that one side of the equation, St. Patrick, a man of
peace, is second fiddle to a military parade. AWVC has the exclusive say in
who gets to walk in this historical parade. The City of Boston, South Boston
Community Groups, the Boston Police have absolutely no say in who walks
the streets of South Boston in the Saint Patrick’s Day Parade.

Back in 2011 Veterans For Peace’s application was denied, when asked why
we were told, “They did not want to have the word Peace associated with
the word Veteran”. Well they did not know the Smedleys very well. We
pulled our own permit and with only three weeks to go before the parade
pulled together 500 people and the Saint Patrick’s Peace Parade, the
Alternative People’s Parade for Peace, Equality, Jobs, Environmental
Stewardship, Economic and Social Justice was born.

Twenty years ago the LGBT community wanted to walk in the parade and
were denied which resulted in a lawsuit that went all the way to the U.S.
Supreme Court resulting in the Hurley Decision. This decision allows the AWVC to exclude any group for any reason they choose including Veterans
For Peace, who have personally experienced the horrors of war and now
stand for peace, the LGBT groups because of who they are and other peace
and environmental groups. The Smedleys immediately reached out to the
LGBT community, inviting them to “walk in our parade”

In 2013 we had close to 2,000 people and seven divisions, two bands, bag
pipers, drummers, a Duck Boat, two trollies etc. In 2014 we repeated the
growing success with eight divisions, eight bands, duck boat, trolley and
floats.

Our eight divisions are: Veterans For Peace, Peace, Religious, LGBT,
Climate Justice, Political, Labor, Social and Economic Justice.
If you or your group support peace and are peaceful and are associated
with one of the stated parade themes (see parade guidelines Here ) you are welcome to join one of these divisions.
Our goal is to end this last vestige of institutionalized exclusion, prejudice,
bigotry, and homophobia and make this parade inclusive and welcoming to
all and bring the message of peace to South Boston on Saint Patrick’s Day.

On behalf of the Saint Patrick’s Peace Parade Organizing Committee.