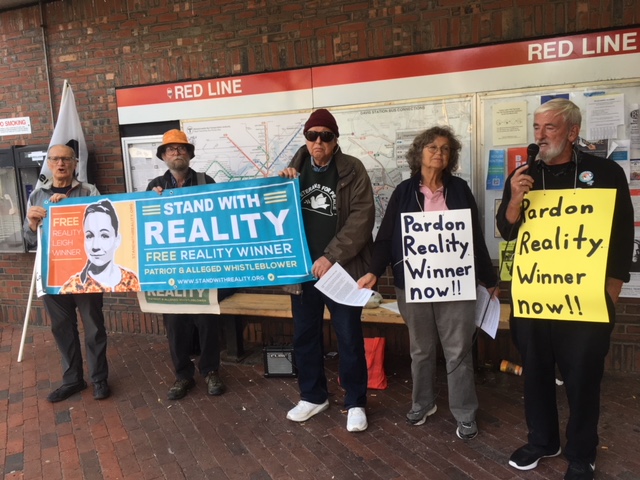 On September 20th at the Davis Square MBTA stop in Somerville supporters of Russian military intelligence interference with the 2016 U.S. elections whistle-blower and veteran Reality Leigh Winner held a “Pardon Reality” stand-out. This was our first pardon effect since Ms. Winner was formally sentenced to five years three months in August by a federal judge down in Georgia. She had pled out in June on one count of violation of the Espionage Act of 1917 after having been blocked in her attempts to get important information about her case. (There is more to the story but you can go to the Stand With Reality website for that.)

This five year plus sentence is the longest ever given to a civilian whistle-blower (Chelsea Manning drew 35 years but that was in a military court). That excessive sentence given the lack of prior criminal record, honorable military service, and other positive attributes has gotten many worried about the effect on future whistle-blower sentences and as importantly the chilling effect on future whistle-blowing and free speech has galvanized many organizations including VFP to support an on-line petition campaign.At Davis Square with signs and banners and passing out leaflets we urged commuters to go online and sign the petition. (See attached leaflet and photos.) The response was significantly more positive than previous times we have stood out there on the days before Ms. Winner’s sentencing. We will be going each month to a different MBTA stop to spread the word about her case and what we can do about it given her current legal status.

As of Wednesday, the 19th Ms. Winner is no longer in the county jail down in Augusta, Georgia but in the hands of federal marshals awaiting transfer to a ye unknown federal facility for women. More later when we have an address that supporters can write letters of solidarity to Ms. Winner.

For now we are urging everybody to Goggle the “Stand with Reality” website and take a minute to sign the on-line pardon petition. Get your social networks to do so as well. 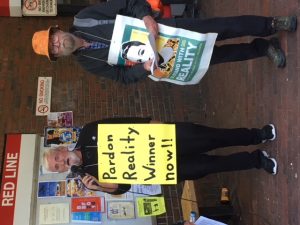 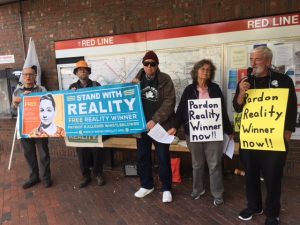 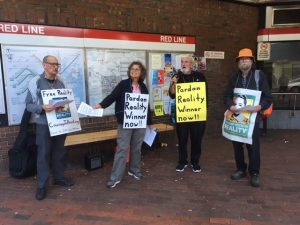 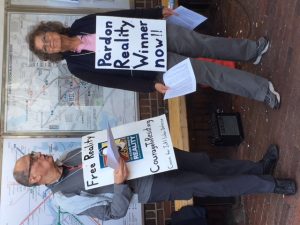