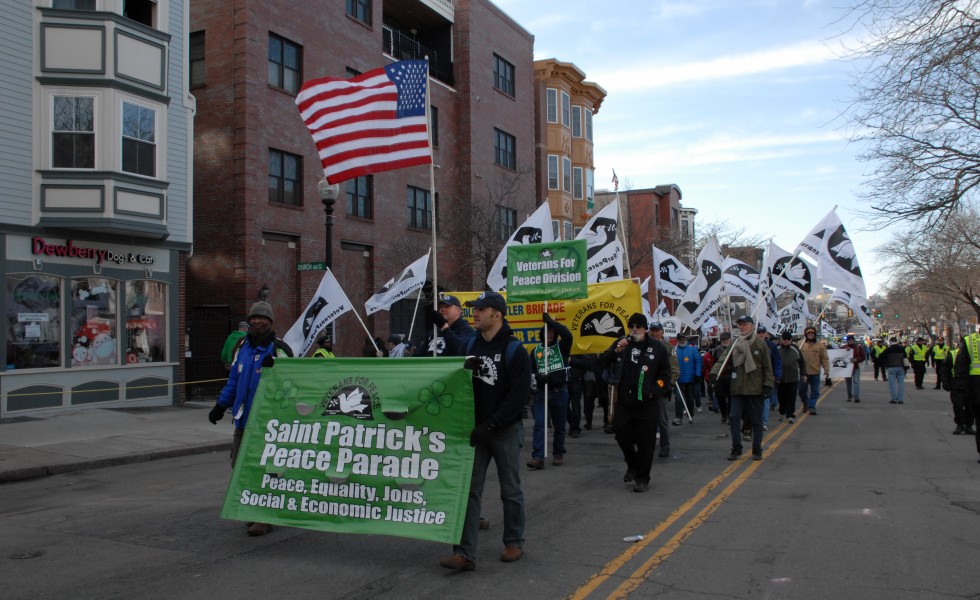 OUTVETS and Boston Pride’s participation in the less exclusive South Boston St. Patrick’s Day Parade, organized by the Allied War Veterans Council, AWVC, is a move towards inclusivity, as reported by most media in and around Boston, Mass. However, little fanfare has been attributed to the organization serving as the probable catalyst for the organizations’ acceptance into the AWVC St. Patrick’s Day parade this year, according to Veterans for Peace, VFP.

VFP has stood on the front lines, fighting on behalf of the LGBT community and other social and economic justice groups since 2011, when they launched the first St. Patrick’s Peace parade. Serving as an alternative parade for groups that have been purposefully excluded by the AWVC, VFP has given LGBT organizations and others an outlet to openly be visible during a St. Patrick’s Day parade, an option that otherwise would not have been available.

“In 2011, we (VFP) had applied to be in the [AWVC] Parade and we were denied,” said Pat Scanlon, a decorated Vietnam Veteran and Immediate Past Coordinator of VFP Chapter, Smedley D. Butler Brigade. “We were told they didn’t want the word ‘peace’ associated with the word ‘veteran.’ For 20 years, the LGBT community had been denied approval to march and we were denied too, so we pulled a permit and in three weeks, we had 500 people on the street, two bands and a Duck Boat. We reached out to the LGBT community and said: ‘they [the AWVC organizers] denied you 17 years ago, we just bought a permit, how would you like to walk with us?’”

Despite the inclusion of OUTVETS and Boston Pride by the AWVC this year, VFP and many other groups are still left behind, denied by the traditional parade organizers, while others who once stood united in solidarity with VFP now have marched ahead without them.

And walk is what the LGBT community did alongside other groups dedicated to peace, equality, and social and economic justice, until now.

Despite the inclusion of OUTVETS and Boston Pride by the AWVC this year, VFP and many other groups are still left behind, denied by the traditional parade organizers, while others who once stood united in solidarity with VFP now have marched ahead without them.

Although VFP is glad of the two LGBT organizations history-making moment, this historical evolution is also poignant.

“I personally had encouraged Sylvain [Bruni] to apply to be in the traditional parade this past January. It was not until the morning prior to the release of their press release on March 13 that both Sylvain and Linda [DeMarco] called me to let me know that they were informed that Boston Pride could walk in that parade,” said Scanlon. “As I told Sylvain and Linda, I celebrate their inclusion into that parade but their decision is a little bittersweet for me personally. I celebrate their inclusion but can’t help but feel some sense of being left on the battlefield. …We have a saying in the military, ‘no one is left behind’ and at first, I felt our friends were leaving us behind.”

Lara Hoke, US Navy veteran, VFP member and minister of the Unitarian Universalist Congregation, Andover, was surprised by BP’s decision, but understood its historical significance.

“It’s an important step toward a more inclusive parade, so it was definitely an exciting development and something to celebrate,” said Hoke. “Solidarity is very important when doing social justice work. Veterans For Peace was always very clear that we would refuse to march in the ‘main’ parade unless the LGBTQ community was invited to march as well.”

BP evoked similar sentiments of solidarity to VFP and other groups being left behind from AWVC’s parade too, just a year ago, via an official press release from the organization.

However, despite VFP’s denial to be included again in the AWVC parade, BP received their approval letter by mail earlier this week, according to the organization.

“While we recognize there is still much work to be done to protect the rights of the LGBT community both here and around the world, and to ensure everyone’s rights to express themselves and to celebrate, we are aware of how symbolically important it is for members of our community to be proudly out among their friends and neighbors as a part of this historic parade,” stated BP’s president, Bruni, through the organization’s official press release announcing why they would march in the parade this year.

For other supporters, the inclusion of Boston Pride and its subsequent decision to march is reason to celebrate but evokes other concerns.

“This situation is fraught with potential for divisiveness and we don’t want to make it worse,” said Gerry Scoppettuolo, Stonewall Warriors and VFP/Peace Parade supporter. “I had great hopes that the Pride Committee would continue to show solidarity with the vets as it has in recent years and honor the anti-war roots of pride and we continue to hope for this.”

Mayor Walsh indicated his intentions, via a former press release immediately made available after the first LGBT group, OUTVETS, was approved to march.

“We’re very pleased to hear that OUTVETS will be marching in this year’s parade,” said Kate Norton, the former press secretary for Mayor Walsh, in a statement. “Mayor Walsh has been advocating for an inclusive parade for quite some time. We’re thrilled to hear that the South Boston Allied War Veterans Council has decided to make the 2015 parade an inclusive event.”

Allowing only two LGBT groups to participate in Southie’s traditional St. Patrick’s parade may still be too traditional to allow all LGBT, labor, environmental and peace groups to join the event. The Rainbow Times submitted its application to march over a month ago to the AWVC but were not given an answer as to the application status, even after placing numerous calls and e-mails to the organization.

“Mayor Menino would not march in this parade for many years because it excluded people and discriminated [against them]. Mayor Walsh, for many years when he was in the state house, did march. But, last year as mayor, he didn’t.”—Sarah Wunsch of MA ACLU

“We never received an answer, not even to let us know we were not allowed to participate,” said Nicole Lashomb, The Rainbow Times’ editor-in-chief.

Sarah Wunsch of MA ACLU explained that the AWVC has a right to exclude people as a privately held parade, but “the mayor is the mayor of the whole city,” she said in an NECN interview. “Mayor Menino would not march in this parade for many years because it excluded people and discriminated [against them]. Mayor Walsh, for many years when he was in the state house, did march. But, last year as mayor, he didn’t.”

In contrast, New York City Mayor Bill de Blasio decided to continue to support equality and did not participate in this year’s Saint Patrick’s Day parade, according to a Care2.com story.

This year, in the parade, “only one group [was] permitted to carry an LGBT-themed banner.” Mayor de Blasio felt it wasn’t “enough.”

“We need something more for it to really feel like we’ve turned the corner. A lot of people feel – I think, rightfully – that that is too small a change to merit a lot of us participating,” Mayor de Blasio said in a recent statement.

Wunsch echoed Mayor de Blasio’s sentiments by stating that Boston mayor Walsh should not have marched, just as the NYC Mayor has refused to march in the traditional St. Patrick’s Day parade. “I think this is still a discriminatory parade,” she said.

Many media and leaders disagree with Wunsch.

Scanlon said that the decision made by BP is a decision that they, VFP, would not have made, “but it might just possibly be for the best.”

“The proof of the success of their decision will not be so evident this year, but next,” Scanlon said. “Will the Allied War Veterans Council allow other LGBT organizations to march with OUTVETS and Boston Pride next year? What will they do if other legitimate LGBT organizations such as Mass Equality, or GLAD, the Gay & Lesbian Advocates & Defenders, or Dignity, a Catholic LGBT group, BAGLY, the Boston Alliance of Gay, Lesbian, Bisexual, and Transgender Youth, Rainbow Warriors or The Rainbow Times are prohibited from joining them? That will be their real test.”

Other organizations are hopeful that the inclusion seen this year will mean that more is to come.

“Unity Pride of greater Boston is excited that spectators of the 114th Annual South Boston St. Patrick’s Day Parade will experience the LGBT Community by allowing OutVets and Boston Pride to march,” said Henry Paquin, Co-Chair, Unity Pride. “We hope that the entry of these two groups is the first step towards a fully inclusive parade.”

Scanlon and Wunsch believe a solution to the problem could be for the city of Boston to reclaim its St. Patrick’s Day parade.

“The city should take back this parade and make it open and welcoming for all. That is our position,” Scanlon said. “But, this discriminatory and exclusionary practice, especially for vets that have served this country and many of which have given blood for this country, not to be able to walk because, after what we’ve seen and experienced, we are working for peace? It is an insult and they are degrading veterans of the United States military.

“I hope that Boston Pride will remember to stand with others who are being left out, still. As the Rev. Dr. Martin Luther King, Jr. said, ‘Until all are free, none are free.’ Or, put another way, ‘nobody wins unless everybody wins.’ I believe that.”—Lara Hoke

“I agree with Pat,” she said. “I think the city ought to take back the parade it ran for many years, and have it be open to all people who want to celebrate St. Patrick and Irish culture. It should be open to all.”

Hoke is, nonetheless, “ happy for Boston Pride that they will march this year.” An open lesbian, Hoke hopes that BP “will work for the inclusion of other LGBTQ groups in the parade, and that they will speak out for VFP to be included as well.”

“I sincerely doubt that OUTVETS and Boston Pride would be marching in the South Boston parade had it not been for the efforts of VFP,” said Hoke. “I hope that Boston Pride will remember to stand with others who are being left out, still. As the Rev. Dr. Martin Luther King, Jr. said, ‘Until all are free, none are free.’ Or, put another way, ‘nobody wins unless everybody wins.’ I believe that.”

Efforts to contact the AWVC for this story were in vain.

About the St. Patrick’s Day Parade in Boston: The traditional Parade organizer’s, the Allied War Veterans Council, AWVC, emboldened by a 1995 U.S. Supreme Court ruling, had continually denied marching permission for LGBT and peace veterans groups as a matter of First Amendment, free-speech rights. After much controversy and loss of many main supporters last year, the AWVC seems to have had a partial change of heart in 2015 by allowing the two organizations to march in their Parade.

*Quotes and excerpts of this story were gathered by Chris Gilmore.

← NECN “No Parade for Veterans for Peace?”
Boston Globe Article →