The Peace Parade Battle is far from Over! 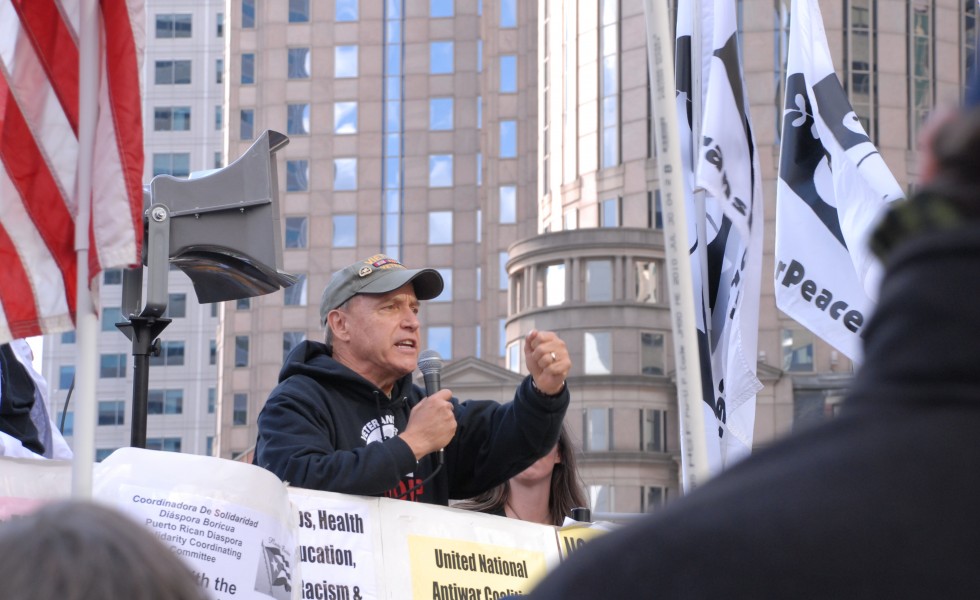 After a year of reaching out to the city of Boston with no response, the Massachusetts chapter of Veterans for Peace (VFP) announced Monday that they’ve canceled their annual St. Patrick’s Peace Parade.

The group’s decision to not walk the streets of South Boston on March 15, for what would’ve been the fifth time, comes after a judge’s ruling upheld Boston transportation department’s denial of the VFP’s application for a noon start time, according to a statement released by the American Civil Liberties Union (ACLU).

In previous years, the VFP has walked after the long-running Allied War Veterans Council (AWVC) parade, which steps off at 1 p.m. Patrick Scanlon, coordinator of the VFP’s Smedley D. Butler Brigade, said the organization submitted its application in March of last year, requesting the earlier parade start time. Their delayed start disadvantages their parade, he said, as watchers leave the route when it gets late.

In February, the VFP sued the city of Boston for First Amendment right violations after the city failed to respond to their parade application for 11 months. The lawsuit, brought by the ACLU, also accused the city of showing favoritism toward the AWVC.

Bonnie McGilpin, Mayor Marty Walsh’s press secretary, told Boston.com that the mayor’s office met with the VFP to hear their concerns regarding the parade. Scanlon said the transportation department met with the VFP’s lawyers on February 20, and set a court date for March 2.

“It was their legal responsibility to meet with us,” Scanlon said. “It was not at their own doing.”

McGilpin didn’t have substantial information to explain the 11-month delay in processing the VFP’s parade permit. This was an issue for Sarah Wunsch, deputy legal director for the ACLU of Massachusetts.

“A parade is considered expression protected by the First Amendment,” Wunsch told Boston.com. “In that context, delay on an application is taken very seriously.”

“Because of all this uncertainty, we haven’t run any advertising, haven’t been able to do any radio promotions; it’s really hampered our ability to organize…It became insurmountable, and that’s why we’re canceling.”

The VFP eventually did receive a permit from the city on February 25 to start its parade behind the AWVC. When the city was discussing changing the route due to the snow, Scanlon said his organization was excluded from the conversation, though in past years VFP members were invited to planning meetings around a month in advance. There they would communicate with police and discuss the route.

“Because of all this uncertainty, we haven’t run any advertising, haven’t been able to do any radio promotions; it’s really hampered our ability to organize,” Scanlon said. “It became insurmountable, and that’s why we’re canceling.”

Before applying for a seperate parade permit, Scanlon said the VFP applied to walk with the AWVC, but were denied.

“They told me they didn’t want to have the word ‘peace’ associated with the word ‘veteran,’” Scanlon said. “After seeing the horrors of war and now working for peaceful conflict, I can’t walk?”

Tim Duross, parade organizer for the AWVC, told Boston.com that the VFP was denied because the AWVC saw that they had a history of “protests and riots,” and they didn’t want that included in their parade.

“We don’t need any trouble, and it looked like trouble was exactly what they wanted to bring,” Duross said. “We’re happy they decided not to march. We’re happy they’ve moved on.”

Scanlon said that it’s “absurd” to say the VFP engages in protests and riots and discounts the AWVC’s view of the peace organization. He’s concerned that, in his view, the city won’t allow another message to be shared on the parade route.

“The group that is running the parade has exclusive rights to decide who’s in and who’s out,” he said. “All the residents and non-profit groups of South Boston don’t have a say who’s on their streets, and I find that incredible.”

To Scanlon, this shows a preference to an exclusionary message, rather than one of peace, inclusion, and social justice, which he says the VFP promotes. He said they’re absolutely applying to march again next year.

“Keep the flags flying, we’re coming back,” he said.

Wunsch explained that they’ve been through a preliminary injunction, and the case will go forward.

“The VFP has a message that is entitled to be seen and heard, and the response of the city of Boston has been appalling,” she said.

When asked to reply to Wunsch’s comments, McGilpin said that this was a matter litigated in federal court and resolved in the city’s favor.

Wuncsh said this case “is far from over.”